Linguistics - the scientific study of language 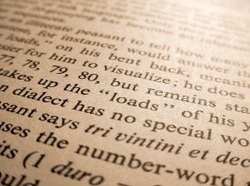 Every human knows at least one language, spoken or signed. Linguistics is the science of language, including the sounds, words, and grammar rules. Words in languages are finite, but sentences are not. It is this creative aspect of human language that sets it apart from animal languages, which are essentially responses to stimuli.

The rules of a language, also called grammar, are learned as one acquires a language. These rules include phonology, the sound system, morphology, the structure of words, syntax, the combination of words into sentences, semantics, the ways in which sounds and meanings are related, and the lexicon, or mental dictionary of words. When you know a language, you know words in that language, i.e. sound units that are related to specific meanings. However, the sounds and meanings of words are arbitrary. For the most part, there is no relationship between the way a word is pronounced (or signed) and its meaning.

There are about 5,000 languages in the world right now (give or take a few thousand), and linguists have discovered that these languages are more alike than different from each other. There are universal concepts and properties that are shared by all languages, and these principles are contained in the Universal Grammar, which forms the basis of all possible human languages.

During this unit, the students will not only be looking at the acquisition of language and the origin of specific words used in English, they will also have an opportunity to focus upon the structure of language used in sentences when writing and speaking publically.  A large part of the unit will be spent studying how to use verbal and nonverbal communication skills to inform or persuade an audience.  The students will also get a glimpse into the art of debate, the power of jury trials and how advertising techniques can influence one's opinions by the words used.

What Personal Values Can Students Gain by Developing Their Skills in Public Speaking?
Public speaking develops self-confidence, a sense of empowerment, effective communication skills and leadership qualities in students. Practicing public speaking in schools is important because it prepares students for real public speaking situations later in life. Many people experience stress and anxiety at the thought of public speaking. However, the more you practice it, the easier it becomes. Successfully learning to speak in public is a valuable life skill.